After over a year of lockdowns and mask-wearing, we’ve all come to appreciate taking a deep breath of fresh air outdoors. But for urban dwellers, that can be somewhat of a luxury - especially when heatwaves compound the problem of air pollution.

According to the European Environment Agency (EEA), exposure to fine particulate matter - an air pollutant that’s a major cause of cardiovascular and respiratory diseases -

across the continent in 2018 alone.

The EEA is aware that air pollution is not only a major health threat but also a key liveability criterion for many people. Last month it launched a

viewer allowing citizens to check the air quality where they live over the past two years.

Could decarbonising our cities be the answer to climate change?

So where can Europeans breathe the cleanest air?

, a UK-based company that reviews home air purifiers, pored over the

and ranked countries and cities based on levels of fine particulate matter - or PM2.5 - concentration. In these areas, the air pollutant is on average well below the annual guideline value of the World Health Organization of 10 μg/m3.

And it’s good news - the best-rated cities are mostly European.

close to the Russian exclave of Kaliningrad is located in one of Lithuania’s ecologically cleanest regions and is home to seven national reserves.

Perched in the rocky central mountains of Corsica, Corte was the capital of the island back when it was briefly independent in the 18th century.

This small rural town boasts an early 15th-century citadel and from here you can explore the gorgeous gorges of the Restonica river.

This medieval waterfront city that sits alongside a lake that shares its name is a perfect base from which to explore the Jura mountains.

The Andalusian city - known as Spain’s sunniest - is surrounded by a rugged coastline of beautiful beaches. Here the air is clean - but rarely cool in the daytime. The region features a desert that made it a prime shooting location for

spaghetti westerns in the 60s and 70s 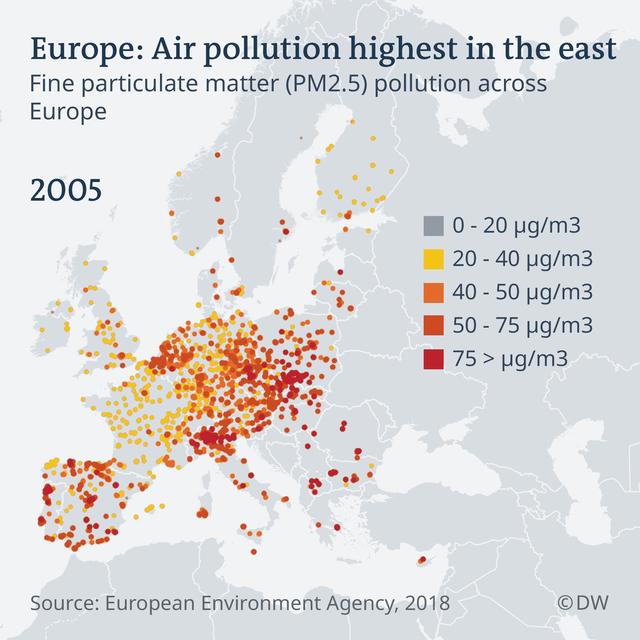 , which looked at fine particulate matter pollution levels for both 2019 and 2020.

A student city with vibrant cultural life, Umea - just 400 kilometres away from the Arctic circle - is a good base for travellers

keen to see the Northern Lights.

, a typical Scottish rural town in Perthshire, right on the edge of the Highlands.

Or try the medieval town of

, once a key flashpoint of Northern Ireland’s sectarian violence, it is now more famous for its castle and the lakes that surround it.

Vielsalm is located in the heart of the

and is a secret spot for nature lovers in search of quiet hikes in the forest.

The Norwegian city of Bodo, between the mountains and the sea, is another great spot to hike and watch the northern lights on the way to the Lofoten islands. It’s also been named a

European Capital of Culture for 2024

To find the cleanest air in Europe, you have to head to Lapland. Muonio is surrounded by Finland’s treasured Pallas-Yllästunturi National Park. It’s a winter wonderland from October to mid-May, where you can admire the northern lights during the Aurora season.

say the area also has a lot to offer in the summer, from hiking to cycling, canoeing or fishing under the midnight sun.