In today's mobile phone market, most of the products are in the shape of a large-screen straight touch panel. This design feels a bit monotonous. However, the mobile phone market a few years ago had rich and changeable shapes, such as sliders and flips. One of the most classic is the old Samsung slider phone. Today, let’s reminisce about several classic old Samsung slider phones.

Looking back at the history of old Samsung slider phones, these phones are stylish. In addition, there is a strong practicality and innovation. When it comes to this Samsung SGH-D908 mobile phone, fans of Samsung mobile phones all admired it. Samsung D908 has indeed left a strong mark in the history of old Samsung slider phones. The flagship mobile phone of the "Boray" of the year had a 3.2 million pixel autofocus camera. There is also a body size of only 12.9 mm thick and high-end positioning. This makes everyone love this phone. Although with the rapid development of the mobile phone market, Samsung D908 has only been popular for one year. But it was also its development that allowed Samsung to see the great commercial value behind this phone. And then quickly launched its enhanced version of D908i. 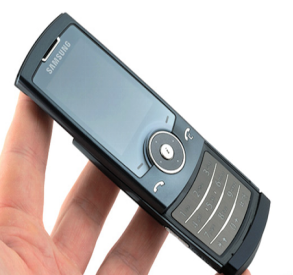 Although the appearance of D908i made up for some regrets on D908. But the glory of the Samsung D series is still in the past. Later, Samsung did not slow down the development of ultra-thin slider phones. It just so happens that the U series appeared at this time. Samsung introduced a variety of models to the rich market in 2007. For example, Samsung SGH-U608 is the U608 mobile phone we are most familiar with. The jewel-like body panel shocked the audience when it was launched. Because the configuration of the mid-end positioning makes it easy for people to accept. So this phone quickly became an "arcade" after it went on the market.

Less than three months after the launch of U608, Samsung U708 was also listed. The turntable operation mode adds support for the 3G standard, which makes the U708 higher in positioning than its predecessor U608. But because China does not have a 3G network, this phone was forced to cancel the 3G module. This also leads to a reduction in the difference between it and U608.

In addition to the above models, Samsung also launched the Samsung M618 in 2007. This is also an old Samsung slider phone. The design of the phone's appearance is simple yet exquisite. And there are three optional colors of red, white and blue. Its body is very small and light. So, it is convenient for users to use and carry.

In addition, as one of the old Samsung slider phones, the Samsung E848 is also one of the most popular slider phones listed in 2007. The appearance of this hand is a calm business style. There are four fashionable colors of black and white, gold and red. At the same time, the phone's body is made very thin, with a thickness of only about 10mm. This thickness can be considered very special in the mobile phone market at that time. At the same time, this phone has newly added the function of dynamic themes. This can provide users with a beautiful functional interface.

In 2008, Samsung launched its new Soul series of mobile phones. Among them, U908 uses a dual-screen design. With the addition of the metal slider, this phone has become an eye-catching old Samsung slider phone. In particular, its touch-sensitive control screen enhances the stylish design of Samsung's ultra-thin slider phone to a new level.

At the same time, the Samsung i458 is also one of the most classic old Samsung slider phones launched by Samsung. The appearance of the phone is youthful and fashionable. The overall design is simple and can support two-way sliding cover. And the main selling point is music playback. Its audio not only uses the most professional pinhole design, but also uses the most advanced audio technology. Therefore, it can bring users an ultimate auditory feast.

At the 2009 3GSM exhibition, the old Samsung slider phone UltraTouch appeared. Its high configuration and beautiful appearance make the public have more expectations for the new ultra-thin slider series phones. The model of this phone listed in mainland China is S8300c.