Accepted wisdom around dog domestication has been turned on its head with the publication of a new study. It reveals that a gene mutation that helped breed tiny dogs – like the Pomeranian and Toy Poodle – is actually an ancient part of the dog genome, also found in the DNA of a 53,000-year-old Siberian wolf.

Human height is what is known as a “continuous trait”, where the incredible variation between individuals is due to an immensely complex combination of genes. “In humans, if you look for the difference between being five foot three and six foot five […], when you look at human height, human skeletal size and body mass, hundreds of genes are involved,” says Dr. Elaine Ostrander, a distinguished senior investigator at the National Human Genome Research Institute of the National Institutes of Health (NIH).

When it comes to the body size of dogs and other canids, the picture is a little less complicated, but there still isn’t a magic gene that controls whether a newborn dog pops out the size of a towering St. Bernard or an ankle-bothering Chihuahua. Nevertheless, one gene, insulin-like growth factor 1 (IGF1), does play a significant role in the process. The gene is thought to bestow roughly 15% of the overall variability in dog height – a far greater contribution than any height gene in humans.

While IGF1’s role in canine body size has long been known, researchers have been unable to identify any mutation in the gene that might produce the effects. “How could we not find the mutation? This just can't be that hard. But it turned out, we just had to look at the DNA a different way; backwards, rather than forwards,” says Ostrander.

A postdoctoral researcher in Ostrander’s lab, Jocelyn Plassais, found the mutation in what Ostrander calls a “genetic back pocket”, hidden not on the strand of DNA that codes for the IGF1 gene, but lurking on the other strand, called the “antisense” strand, in a region that codes for a type of transcript called a long non-coding RNAs (lncRNA). LncRNAs don’t, as their name suggests, code for any proteins, but their ability to regulate coding regions of the genome is starting to be recognized – Ostrander points out that a similar effect has already been noted on dog ear size.

Plassais had searched for the gene across a catalog of 1,431 canine genomes, some taken from archives, like the Sequence Read Archive, and others newly generated at the NIH’s Intramural Sequencing Center. After identifying the mutation, a single nucleotide polymorphism called rs22397284, Plassais, Ostrander and colleagues then mapped three genotype variants called alleles. Some dogs had two cytosine nucleotides (genotype CC), some had two tyrosine nucleotides (TT) and others had a heterozygous combination of both (CT). 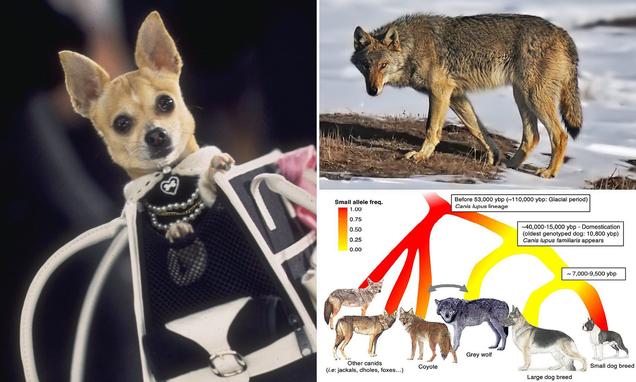 The team then mapped these three genotypes against body size in a sample of more than 50 dogs. The findings suggested that rs22397284 was the influential point mutation they had been searching for. Virtually all miniature schnauzers, which weigh in at 11-20 pounds, had the CC allele, while a sizeable chunk of standard schnauzers (a bit chunkier at 30-50 pounds) had a CT heterozygote genotype. Giant schnauzers, which live up to their name at up to 85 pounds, were virtually all TT at the polymorphism.

The team didn’t stop their analysis at domestic dogs. They also looked at other animals in the canid family, such as coyotes and jackals, the genomes of wolves and even the closely related Andean fox. This analysis showed a strong geographical link, where canids in the global south tended to have a CC genotype that paired with smaller body size. “In the southern hemisphere,” says Ostrander, “there seem to be advantages to being smaller.”

A history of small dogs

Working with evolutionary biologists Professor Greger Larson, from Oxford University, and Dr. Laurent Franz of Queen Mary University of London/ Ludwig Maximilian University, the team then took a look back in time to try and pin down the origin of the "small" dog allele. Their findings turned paradigms around dog domestication on their heads. Conventional wisdom would suggest that, because wolves are big and domestic dogs are smaller, that domestication of dogs, which began roughly 20-40,000 years ago, would have been accompanied by a chance mutation that decreased their body size. “Then people selected on it, because we wanted little dogs for our companions,” says Ostrander. The new findings, she says, suggests that “only the last part of that is true.”

Instead, the team’s analysis showed that CT heterozygote wolves, featuring one copy of the "large" allele and one copy of the "small" allele were stalking the Siberian tundra over 50,000 years ago. “That was so exciting and so surprising,” says Ostrander, “because it didn’t fit our naïve worldview.”

While the exact path that IGF1 has taken over the last 50 millennia is still to be mapped out, it appears that it almost died out among wolf populations. However, it was reawakened by the genetic forces of selective breeding during domestication, illustrated in Ostrander’s paper by the emergence of many ancient genomes with CC alleles in the Middle East roughly 10,000 years ago.

The next steps for Ostrander’s team will see the researchers approach this surprising finding from different angles. Plassais is eager to work out exactly how a mutation in a lncRNA can lead to such dramatic changes to body size, and aims to do functional work to map out the pathway. Ostrander has set her sights on other genes – her analysis shows that another gene, LCORL, likely has a similar size of effect on body size as IGF1. “I want to know how all those proteins work together and affect body size,” says Ostrander.

There is incredible complexity in the genetic and proteomic pathways. But, Ostrander reminds me, there is also incredible phenotypic variation among man’s best friends, which we have only began to scratch the surface of. “We always talk about small things: the Toy Poodles and the Pomeranians and Chihuahuas, and the big things, the Newfoundlands and the St. Bernards and the Great Danes,” concludes Ostrander. “But there's a whole continuum in the middle. Where all those genes matter so much. And I I'd like to understand that continuum as well.”

Tags： how has technology affected the way that we receive news,