It’s that time again: a brand new month and a brand new slate of gay or possibly gay characters showing up on beloved streaming services including Netflix, Hulu, Amazon Prime, HBO Max, Disney+ and Showtime! It appears this month that most TV services have given up on us so that

can premiere in an environment similar to that in which the original series premiered. But let’s discuss what IS happening.

that promised to turn gay people into straight people but really just turned them into people who wanted to die.

My style icon and singer of legendary dance tune “Stars are Blind” has a cooking show and her guests include non-binary queer musician Demi Lovato!

In Season One of this Mexican drama, havoc descended upon the student body at El Colegio Nacional when a hacker started leaking students’ secrets to the entire student body — popular kids got bullied, outcasts became cool, and everyone was under suspicion. Know-it-all recluse Sofia raced against the clock to catch the hacker beofre more secrets went public. Alex was an out lesbian student trying to fit in, and Isabela De La Fuente was a trans woman outed by the hacker. What will happen in Season 2? Nobody on the internet wants to tell me! But the lesbian is back and making out in the trailer, so.

There is nothing to suggest that this show will be gay except that it is about an all-girls school and I understand those locations are notorious for this kind of activity. Even if nobody is gay though, it’s gonna be a great watch — the cast and crew is composed entirely of Arab women and it tells the story of how a bullied girl gets revenge on her bullies, only to learn that no one is all bad and no one is all good including herself!

This Spanish series follows writer Valeria and her three best friends; Carmen, Lola and Nerea. In Season 2, Valeria is seeking inspiration after hitting a dead end with her career and relationship. Nerea is a lesbian who in Season One found herself living with her parents she wasn’t out to while she paid them back for her master’s degree.

This five-part docuseries from the creators of

“brings fresh eyes to epic tales from the wide world of sports.” The third installment of the Untold documentary series focuses on noteworthy Republican and

trans Olympian Caitlyn Jenner as she recounts major life events like winning a gold medal, raising a family, and her coming out.

Streaming in Lesbian, Queer Et Al on Hulu in August 2021

really determined to have as many lesbian films as possible

E is a sexy DJ who finds a bag of money, goes on the run with her husband of convenience Matt and then flees to her ex-girlfriend’s house in the outback. This Australian film that got mostly bad reviews begs the question: “Can she keep the money, conquer her demons, AND get the girl?”

This is a film about swans in the pond who swim around all day long singing songs about swan stuff that we probably couldn’t fully relate to without actually being swans ourselves. Just kidding HAHAHAH it’s about ballet and feathers! There’s a sexual scene with Natalie Portman and Mila Kunis.

This mediocre queer film “paints a portrait of the extravagant Kristina of Sweden who fights the conservative forces that are against her.” Also she’s gay.

After viewing this film starring lesbian actress/model Patricia Velasquez as a terminally-ill lesbian who bonds with a woman who lost her son to cancer,

that the film was aggressively recommended to her by Netflix because it knew she had a column where she recapped usually-very-bad lesbian films. But you can decide for yourself!

Under the Tuscan Sun

When Frances Mayes learns her husband is cheating on her, her gay best friend Patti (Sandra Oh) whisks her off to Italy for a wonderful tour where she purchases a rural Tuscan Villa. This is a classic from the Mommi cannon and Sandra Oh is gay, so.

, Heather Hogan describes it as “a character study of two women who clumsily and gently brush up against each other and find new happiness because of it. In the process one of them simply realizes she likes girls.” Also,

who writes for Autostraddle is in it! 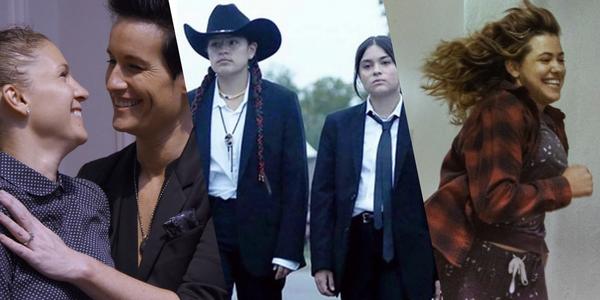 Taika Waititi and Sterlin Harjo’s new and hotly anticipated half-hour dramedy follows the exploits of four indigenous teenagers in rural Oklahoma dead-set on doing whatever it takes to get out of their hometown and move to California. Every writer, director and series regular on the show is Indigenous. It promises “rappers, catfish, Indigenous superstitions and spirits both hilarious and terrifying, laughter, tears, unexpected grandmothers, decent people, terrible people and a cavalcade of supporting characters who color and shade this already vibrant world.”

According to TV Guide

. “There’s the movie most people will see — a story of platonic love between a soon-to-be single father and his loner surrogate. And then there’s the movie I saw — the same premise filtered through an awareness that the woman at its center is one of the most talented trans performers working today.”

This romantic drama follows Joey, an aimless young woman in a small town who thinks she’s found a path through an Army recruiting office visit but when she falls for a girl named Rayna, the path diverges.

According to Kayla’s review

, the Rachels who star in this film best known for its spit play “deliver bruising, dynamic performances as Ronit and Esti respectively, two former friends and lovers from the same tiny bubble of a Jewish orthodox community in the London suburbs.”

All the Gays, Girls and Theys Content Coming to Amazon Prime Video in August 2021

middle school girl who finds herself having feelings for another girl and turns to social media quizzes for answers.

HBO Max has been delivering a lot of queer content since its launch so this month’s weak slate is kinda surprising… so keep your eyes out!

Famous for its truly appalling bisexual stereotypes, Sharon Stone stars as a depraved bisexual murderer in this ’90s thriller.

Christopher Guest’s mockumentary about showdogs presents Jane Lynch as trainer Christy Cummings, a competitive handler working for poodle-owning couple Sherri Ann and Leslie Ward Cabot. But there’s more going on between Sherri and Christy than meets the eye, if you know what I mean and I think you do!

Allison Pill plays Dick Cheney’s lesbian daughter Mary Cheney in this HBO biopic about Dick Cheney, which positions him as being the actual man pulling all the strings of the George W Bush administration.

This reality show pits upcoming streetwear designers against each other in front of a panel of judges including A$AP Ferg, Cardi B, Dapper Dan, and Wiz Khalifa.

Elena Cañero-Reed will be starting seventh grade while continuing to dream of her eventual position as President of the United States when Season 2 drops on Disney+ this August. Her Mom, Gabi, has a lesbian paralegal named Camila who is a close friend of hers and the kids.

Sophie, Dani, Micah, Finley, Bette, Tina, Nat, Alice, Tess, Angie, Jordie and Gigi are back to have crushes and makeouts and business deals and new jobs and fresh drama and extended families and the whole deal. I believe we have spoken of this program at considerable length and will continue to.

Season Two begins with Abby having determined she’s too busy to kill herself. She’s just starting to get her life together when SURPRISE! A global pandemic and a family emergency arrive to test her delicate equilibrium.