means you can dive into a pool or jump into the shower on a morning and not have to worry about whether you're going to damage your wristband, and Fitbit makes some of the best.

More and more trackers are now waterproof as the technology has become far more common. It used to be a featre reserved for high-end devices, but now even cheap activity bands like the

are able to take a dip.

However, not every Fitbit device is pool-worthy, so in this guide we're going to run you through each of the company's waterproof watches so you can choose the right one for you.

Now we may use the term 'waterproof', but it's worth noting that doesn't mean these trackers can go anywhere wet and do anything when submerged. Each of these trackers has limits, so we've included the exact details with each entry.

: our guide to the best Fitbit devices for every occasion

Which Fitbits are water resistant?

The Fitbit Sense can track your stress levels, and is safe to take into the pool if you like to wind down by swimming a few lengths. There's also a dedicated swim tracking mode so you can monitor your workouts in the pool.

The Fitbit Inspire 2 is beach, pool and shower-friendly, resisting water ingress to a depth of 50 meters. It detects when you start swimming, and automatically logs how long you spend on your workout as well.

The latest Fitbit Charge is the first in the line to offer on-board GPS, so you can track outdoor swims. It's water resistant to 50 meters, so it's safe to take in the pool and to wear in the shower afterwards.

Last year's Fitbit Charge is still an excellent fitness tracker, and its price has plummeted since the launch of the Charge 4, making it a fantastic deal. It was the first in the Charge line-up that you'll be able to take in the pool.

Fitbit's first true smartwatch is also waterproof so you can take in the pool, and it's one of the best Fitbit products to track your swims thanks to its sleek, lightweight design. It's also great value considering its impressive feature set.

The new Fitbit Versa 3 is a GPS-packing, workout-tracking smartwatch that you can safely take underwater to depths of 50 meters. Fitbit says you can happily wear it in the shower, the pool and the sea (though rinse that salt off afterwards). 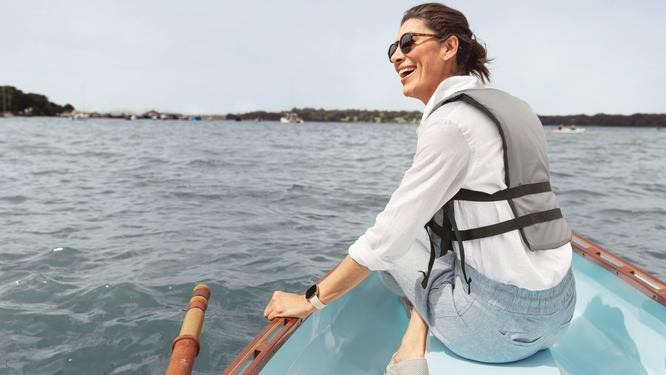 The Versa 2 is a fantastic looking smartwatch that will serve you well all day and night, with contactless payments, activity monitoring, sleep tracking and, of course, water resistance. Well worth a look if the Versa 3 is a little too expensive.

Fitbit's second smartwatch is waterproof and capable of tracking your laps up and down the pool. The original Versa is a couple of generations old now, which means you can snap one up very cheaply.

Much like the standard Fitbit Versa above, the Versa Lite is also water resistant despite the fact it's both slimmer and cheaper. A great budget buy for tracking laps in the pool.

The Fitbit Inspire 2 isn't a huge leap forward from its predecessor, but it features a refreshed look, improved heart rate zone tracking, and a free trial of Fitbit Premium, which will prove extremely handy if you're a keen swimmer.

The Fitbit Inspire and Inspire HR are two of the company's latest fitness trackers, and both are capable of being submerged. They don't track many swimming stats though, so you may not want these if you want to monitor your pool time activities.

Fitbit's first genuinely water resistant product was the Flex 2, which was announced late in 2017, and it's currently the cheapest waterproof Fitbit if you can still find it in stock.

The original Fitbit Ace was only splashproof, and not recommended for swimming, but the chunkier Ace 2 is much more robust and easily able to handle swimming lessons and family vacations by the sea. A truly kid-friendly fitness tracker.

As well as knowing how deep you can take your Fitbit, the company also has some advice on what you should do after taking your band in water.

The official Fitbit website has a note in the waterproofing section for each of the products above (apart from the Fitbit Ace) that states the following: "After swimming or getting the band wet, we recommend drying the band because, as with any wearable device, it's best for your skin if the band is clean and dry. We do not recommend wearing [the device] in a hot tub or sauna."

If you're interested in further details of how you can protect your Fitbit and your comfort when using one of its products around water, the company has even more details on

Check out our complete guide to the