Early in the century, everybody had (or wanted) an iPod. Then, in 2007, along came the iPhone, which combined the best features of iPods and phones. As the iPhone grew in popularity, the need for an iPod, iPod Mini, iPod Nano, iPod Shuffle or iPod Classic dwindled. I distinctly remember saving up money to get my first iPod (a first-generation iPod Shuffle with 512MB of storage), but kids nowadays don’t seem to share that ambition.

In 2017, Apple slimmed down the iPod line to just one device, the

. But it’s not abandoning it: Apple

has just updated the iPod Touch

doesn’t deliver a radical redesign. It still has a headphone jack, a home button with no fingerprint sensor, and an overall small build that can fit entirely inside the display of an iPhone XS Max with plenty of space.

You might be wondering who the iPod Touch is for. Unless you have a huge music collection that you want constantly with you, the main audience is kids. It’s the perfect first device for somebody too young to have a phone, since it has no cellular option.

Oh, and it starts at just

, making it the most affordable entry-level iOS device. It runs iOS 12, and thanks to the A10 Fusion chip inside, you can expect an upgrade to iOS 13 in the fall.

) for several days, and here’s what I’ve found.

What’s in the box?

Under that, you’ll find a brief quick start guide, a Lightning to USB-A cable, and a pair of Apple EarPods with a headphone jack port. Yes, Apple kept the headphone jack alive on the iPod Touch, and that’s good news, since it’s primarily an iPod.

The size of the iPod Touch hit me immediately: The roughly 4.86-inch-long device, with a 4-inch display, fits nicely in my hands. Since the 7th Gen Touch is running iOS 12, you can use a Quick Start to set it up easily. Just hold the new iPod Touch next to another iOS device you’re signed in on, like an iPhone or an iPad. Once they find each other, you can choose to set up the iPod Touch via your original device.

It worked really well and is part of the “it just works” magic that Apple is known for. From there, it was time to start jamming away.

Have I seen this before?

The 2019 iPod Touch is tiny, just 4.86 by 2.31 inches, so it’s still very much a device you can use with one hand. There is no struggling to stretch a finger to reach one side of the display or a top corner.

You still have the classic white bezels surrounding a 4-inch LCD with an 1136 x 640 resolution. Above the screen, filling in some of the space, is a 1.2-megapixel front-facing camera. Below, you’ll find a classic home button. The top of the device is where the power or sleep button lies, while the volume rocker is on the left side. The bottom packs a downward-firing speaker, a Lightning connector and – drum roll please – a headphone jack!

The back is where your color choice shines through, and you can get some vibrant ones. Apple offers the 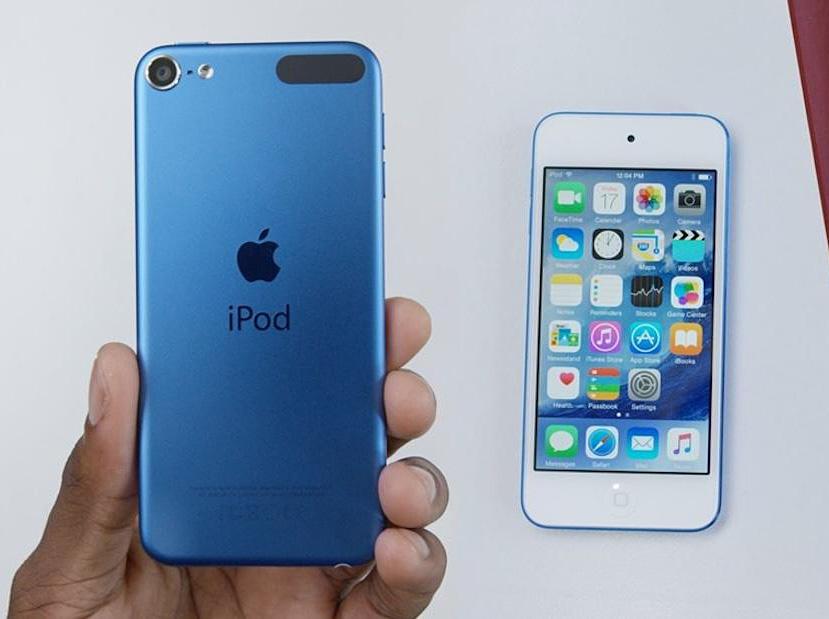 in space gray, gold, silver, pink, blue and (Product) RED. (The (Product) RED designation is part of Apple’s partnership with

, which raises money and awareness to end HIV/AIDS.) I’ve been using the blue model – I’m tempted to call it an electric blue – and it looks great. I like how Apple kept the overall aluminum design. It’s a solid pop of color.

Lastly, Apple kept a single-lens 8-megapixel camera on the back, and you’ll notice a black plastic cutout on the rear side. That’s there to let connections pass in and out like Wi-Fi, Bluetooth and GPS. After all, the core design of this is aluminum, and since the iPod Touch has no cellular option, Apple opted for this small piece of plastic rather than cut-in antenna bands.

The new iPod Touch still feels like an iPod to me, even without the classic click wheel that disappeared long ago. I thought it might be strange to go back to a day before Touch ID and Face ID, but it can be surprisingly refreshing. An iPod Touch still serves the main requirement of letting you listen to music, and Apple at least kept the headphone jack alive on this product.

So let’s talk music. As expected, you can use streaming services like Apple Music, Spotify, Tidal and Pandora on the iPod Touch, to name a few. Apple still offers the iTunes Store to buy single tracks or albums, and those work on here as well.

Furthermore, you can import CDs into iTunes and sync them to the iPod Touch. CDs might seem like an aging technology, but if you have an extensive collection of tracks that you ripped from CDs and want to have them on the go, the iPod Touch is a great way to make that happen. The iPod Touch still handles the main requirement of an iPod well.

However, the other big push with the 7th Gen iPod Touch was to unlock more features of iOS 12. It’s powered by the Apple-made A10 Fusion chipset, which enables Group FaceTime and Augmented Reality experiences and speeds up the whole experience.

When I first set up the

, I started with a clean slate and signed in with my iCloud account. As my iMessages began arriving along with contacts, emails and photos, I noticed it take a speed drop. I have a feeling this came mostly from indexing and just having that massive influx of data, but it recovered well shortly after.

The Group FaceTime change is a big one, as iPod Touch owners can now use video (previously they were limited to just audio). It performs well. I tried it with about seven other people in a call and I didn’t experience any noticeable performance issues on my end. You can add fun stickers and draw a bit over your Face, but since there is no Face ID unit on the iPod Touch, you won’t have Animoji or Memoji figures.

Additionally, the Augmented Reality experience is a good one with a small screen. My go-to for basic AR testing is the IKEA application where you can place furniture to see how it looks. (It’s also a great way to explain AR to someone.) The iPod Touch handled it well with no real issues. A more intensive AR experience like World of Dinosaurs also performed well, although with a small screen, you may find yourself pinching down on the size and stepping back so you can see the full graphic – or T-Rex in this case.

So while the processor upgrade might not seem that huge on paper, it creates a better experience. And it sets up the 7th Generation

to perform better in the coming months and years. Apple will likely push the AR capabilities for this device a lot.

) offers a lot of value for the price. While I can’t wholeheartedly recommend the $299 128GB or $399 256GB, since that’s a lot to spend on an iPod, the base model provides a lot of useful features. Sure, it doesn’t have Face ID, the latest processor or a large screen. However, it does give you full access to everything iOS has to offer, including the App Store with thousands of experiences.

The iPod Touch is the most affordable entry point into the iOS ecosystem, and that’s a big deal. So if you’re a parent who wants to give your kid a first device, the

makes sense. It’s safer and more closed off than a phone, with no cellular service, and thanks to Family Sharing and Parental Controls being built into iOS, Apple makes it easy. The iPod Touch is also a good solution if you want a secondary iOS device to use for music.

It felt a little weird to review an

in 2019, but it still feels refreshing to some degree. Think of it like this: It’s a small-screened iOS 12 device with a reliable processor that can handle FaceTime, store plenty of tunes, use apps and fit in a pocket.

Note: The price above reflects the retailers’ listed price at the time of publication.