Almost 500 Pepkor stores have been looted, leading to its supply chain and distribution operations being severely disrupted.

The Foschini Group said to date, approximately 190 stores have been looted and damaged to varying degrees, and none of its KwaZulu-Natal stores are currently trading owing to safety concerns.

Acts of violence had been gaining momentum since the weekend after former president Jacob Zuma was placed under arrest and incarcerated in Estcourt in KwaZulu-Natal on 7 July.

Protests demanding Zuma's immediate release had morphed into riots that have been most intense in Gauteng and KwaZulu-Natal.

Pepkor - the owner of Pep, Ackermans and the JD Group - said to date, 489 retail stores representing approximately 9% of the group's total retail stores have been damaged and looted.

One of the JD Group's distribution centres in Cato Ridge, KwaZulu-Natal, has also been looted and damaged.

In addition, as a precautionary measure to ensure the safety of employees and customers, a varying number of retail stores were intermittently closed across the affected areas in the past week.

According to Pepkor, its supply chain and distribution operations in the affected areas have been severely disrupted and numerous additional measures, including tactical security, have been put in place to safeguard the group's distribution infrastructure and assets.

"The group continues to closely monitor the situation and is in constant contact with law-enforcement agencies, security service providers and other relevant stakeholders," said Pepkor in a statement.

Clean-up operations and the reopening and restocking of stores have commenced - albeit on a limited basis.

Leon Lourens, Pepkor CEO, said: "The vast majority of the stores across our footprint remain operational and, as a group, we are focused and determined to rebuild and restore affected operations as quickly as possible."

Pepkor said the group was not yet in a position to assess and determine the full cost of the damage suffered, but reassured shareholders that it has insurance cover in place to mitigate the losses incurred. 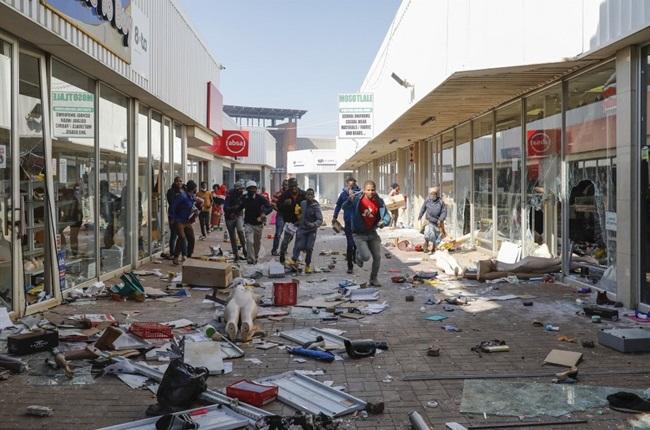 Clothing retailer The Foschini Group (TFG) said by Friday, approximately 190 of its stores had been looted and damaged to varying degrees. None of its KwaZulu-Natal stores are currently trading owing to safety concerns.

However, trade continues as normal in the rest of the group’s South African and African regions, supported by strong supply chains. This includes the group's own manufacturing capacity - that remains largely unaffected - which is encouraging, said TFG.

TFG said it was working with all its stakeholders, including the South African government, to start the process of rebuilding and restocking the affected stores when it is safe to do so. "The timelines to reopen will be quick in some locations, while in others [it] will be dependent on the nature and extent of the damage and on the availability of the relevant resources and supply chains."

Counting the economic cost of riots: What we know so far

Grocery retailer Pick n Pay said on Friday that some Pick n Pay and Boxer stores have been affected by the unrest in KwaZulu-Natal and parts of Gauteng.

"The situation remains fragile. But we want to assure customers and communities that our Pick n Pay and Boxer teams are working flat out to bring essential supplies from Gauteng and the Western Cape into the affected areas.

"Key to this is [the] N3 highway between Gauteng and KwaZulu-Natal, which has just reopened. This enables us to begin the task of transporting large volumes of essential products to the communities that most need them," said Pieter Boone, CEO of Pick n Pay.

"We are in constant dialogue with our valued suppliers of fresh meat and produce, frozen, canned and packaged foods, and groceries. Some have been damaged and disrupted by the violence. But, like us, they are getting back on their feet."

Appliance and grocery retailer Massmart said on Friday that its facilities had not been spared by the looting, violence and property damage.

Protesters gained access to and made off with merchandise at 18 Cambridge stores, ten Game stores, eight Builders stores, three Cash & Carry and two Makro stores in the past week.

Other retailers have suffered similar casualties this past week. Clothing retailer Mr Price said on Wednesday that 109 - around 7% - of its stores were looted, while more than a tenth of Cashbuild’s stores were also attacked.

said 99 of its restaurants had been damaged during the past week's looting in in KwaZulu-Natal and Gauteng.