packs a lot punch in an ultra-thin (and ultra-sexy) case, making it a good choice for people who need the lightest laptop available but prefer a Mac with OS X to an iPad with iOS.

That said, the MacBook's form necessarily dictates some of its function. And with prices that start at $1,289 (

) , it overlaps with Apple's MacBook Air and MacBook Pro line-ups -- making it even more important to choose wisely when spending your money. For would-be buyers drawn to the small size and high-end looks, but concerned about whether the 2016 MacBook is a long-term keeper, here are five things to keep in mind.

If you're a road warrior...

The biggest pro still going for the MacBook line (

) is its overall construction and build quality. The full-size, edge-to-edge keyboard (with large, backlit keys) minimizes any issues with typing on a small laptop; the 2304x1440-pixel 12-in. Retina display (packed with 3 million pixels) is simply gorgeous; and the large, pressure-sensitive, multitouch trackpad delivers haptic feedback when you're using it. The combo of all three features smacks of high quality, as you'd expect from an Apple device. (It would have been nice if Apple had updated the 480p front-facing camera. Maybe next year.)

In addition to silver, space gray and gold colors offered when the

, this year's model has a rose gold option. I wouldn't buy one in that color personally, but rose gold seems to do well elsewhere in the world. (I personally love the space gray.) More important than a new color are the updated internals based around

and system architecture. The changes boost overall speed by between 15% and 25%,

according to most benchmarks

. For day to day use, you won't notice much difference compared to last year's MacBooks, but more speed is always welcome.

Most importantly for travelers, the MacBook is just 14mm thick when closed, weighs in at just two pounds, offers up-to-date Wi-Fi options like 802.11ac for maximum throughput, and runs a very responsive OS X. This Mac is a road warrior's dream. It's small enough that you may forget it's in your carrying case or backpack, yet powerful enough to breeze through general tasks like word processing, web browsing and email without any noticeable stalls. And with 10 hours of battery life, it can last through most workdays without needing to be plugged in.

The MacBook's keyboard stretches from edge to edge.

So when buying, you basically have to decide two things: which of the three processors do you want, and how much storage do you need. In general, more of each is better -- especially if you tend to keep hardware for several years. 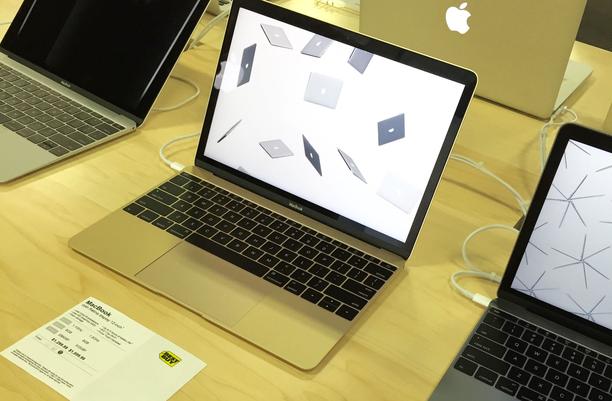 While the new Skylake-based chipset is faster than last year's model, it still offers about an hour more of battery life. The MacBook itself consumes about 5 watts of power, contains no moving parts -- there aren't even any cooling fans -- and runs absolutely, completely silent. Really a stickler for quiet? You can also silence the haptic click in the trackpad in System Preferences. Shhh... you hear that? Well, it's not the new MacBook, that's for sure.

Lately, I've been traveling a lot, and since November, I've always chosen to fly with

case. (The iPad has effectively replaced my four-year-old 15-in. MacBook Pro for travel.) What made that workable for me was the introduction of iOS 9: ever since Split View became a thing for the iPad, I've been able to work on a tablet just as effectively as I have on my Mac, especially when writing and researching on the go.

For many, however, relying on a device that runs iOS isn't an option, no matter how portable the hardware is. For personal, technical or software reasons, a large number of Apple users still prefer OS X. This new MacBook fits the bill if you need a full-featured operating system, can get by with minimal ports (one), and want ultra portability. While the iPad Pro/Logitech Case is more travel-friendly than the 15-in. MacBook Pro, the MacBook makes the iPad/case combo feel downright clumsy. And with OS X, the MacBook can run all of the desktop software you're already accustomed to.

As noted, the MacBook cannot be upgraded; what you buy now is what you'll be using for the life of this product. The memory, processor, and storage are all soldered onto the MacBook's motherboard. Both models come with 8GB of 1866MHz LPDDR3 SDRAM memory and both use the Intel HD Graphics 515 graphics card. The only customizable option is the CPU, which can be upgraded to a 1.3GHz dual-core Intel Core m7 (with up to 3.1GHz with Turbo Boost). The upgrade costs $250 extra on the $1,299 model, $150 more on the $1,599 MacBook. That brings the price of a "tricked out" MacBook to $1,749.

Is the faster chip worth the money? I'd say yes, especially if you're thinking long term. I always spring for the highest-end processor when possible. You'll thank yourself a few years from now.

Remember when the iMac only had USB ports and everyone lost their shit? Remember when the MacBook Air came out with no optical drive and critics blasted Apple for jumping the shark? The MacBook is that type of product, even in its second iteration. While it has the wireless support you would expect (like Bluetooth 4.0 and every major modern-day Wi-Fi standard), one day we'll likely look back at it as the first of its kind. But the fact that the MacBook still only has one USB-Type C port on the left and a headphone jack on the right may limit its appeal to a specific set of people.

Plain and simple: If you use numerous ports on a laptop, you're going to either need another computer with built-in ports or a

. That's not ideal, since it means something else to carry with you when you travel. And while Apple

update other internal bits of hardware, the

, which means its bandwidth is limited to 5Gbps. For most users that may not matter, but you should know that going in.

The MacBook has a lot going for it: It runs the full version of OS X (with access to the accompanying library of software available for Macs) and comes in an amazingly tight and light package. It's got a full-size keyboard, modern hardware and a crisp 12-in. Retina display. But it's not the only option available for Mac users. If the lack of ports or limited processing horsepower are issues, Apple, of course, will be more than happy to sell you a 13-in. or 15-in. MacBook Pro or even a MacBook Air.

Otherwise, if you're seeking ultimate portability, the MacBook deserves a look.